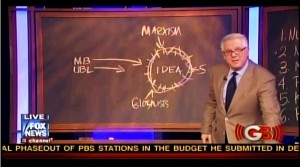 “Today is kind of a more ‘think out loud’ kind of program,” Glenn Beck said towards the middle of his show today and it definitely seemed like that was the case. In that segment, he argued the difference between an “idea” and “stuff.” Going by his description, it wouldn’t be truly unfair to describe much of the show, particularly the opening, as “stuff” since Beck seemed to bounce around from fact to theory to conjecture without settling on any concrete idea (My attempt at a summary of the opening 20 minutes: The White House planned the assault on Osama bin Laden in incredible detail, however, the fact that they haven’t decided what to do with the photos of Bin Laden’s body implies that they haven’t thought things through, however, they don’t appear to be incompetent so perhaps they’ve thought that part through, however, that would lead to destabilization in the world, however, maybe that’s the very part they thought through!). However, there was one idea that he seemed fairly sure of: the death of Bin Laden probably won’t change anything in the long run.

“It doesn’t change because Osama bin Laden is not a person. It’s like the Muslim Brotherhood. They are not really people but this is the way we look at them. We look at them as people or groups and we look at America as an idea: Freedom. So, when they start to come after and attack us, what do we do? We immediately put up fences around the idea. And we put them around as much as we can to lock up this idea and protect it. And when they continue to come, we put up more fences. And we make it so they can’t come through.

But they’re not people. They’re ideas. And it’s this one idea: Sharia Law. You can kill the Muslim Brotherhood and you can kill Osama bin Laden but Sharia Law and the idea of Sharia Law lasts. Here’s where we’re in trouble. We’re not really protecting an idea anymore. We’re protecting stuff. And stuff loses to an idea every time.”

Beck went on to explain that the United States can follow the concepts in his E4 guidelines to return to an time of an idea and not stuff.

Earlier, he had explained that he usually gets “in trouble” for this type of show and I can see why. You really can’t blame a casual viewer for flipping by the show today and thinking it all gibberish. So, to put this bit in simpler terms (yes, even simpler than “idea,” “stuff,” and “fence”), I point to this pretty cool interactive chart that the New York Times put online today. On it, users can plot their reactions to Bin Laden’s death along two rubrics, Positive/Negative and Significant/Insignificant. I think what Beck was saying here is that he’d be in the Positive and Insignificant section.