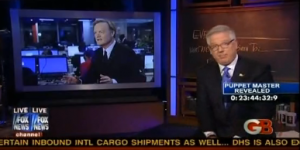 Glenn Beck doesn’t seem to have much interest in the big media story of the weekend (that whole Keith Olbermann thing). Instead, he’s more interested in a quote from MSNBC’s “hot, new loverboy” Lawrence O’Donnell who said on the air last week that he was a socialist. That’s because “the radicals revealing themselves” are one of the first steps leading us to “The Event.” Yes, all this week, in addition to his much publicized George Soros exposé, Beck will be showing us how the extreme left plans on bringing about…an overhyped, Lost rip-off!

Ok, not so much. Beck is actually taking the term “event” from Mark Penn’s assertion that President Obama would be helped by a disaster similar to the Oklahoma City bombing. On today’s show, Beck pointed out that many critics are already setting him up to be the fall guy for this Event. He’s probably right. Beck responded by setting up anyone who attempts to set him up by saying that he knows that’s what they’ll do. Basically, the takeaway here is that there will be a disaster of epic proportions soon and it will lead instantly into a blame-game of epic proportions. But don’t worry, all asses are now sufficiently covered.

But enough about the eventual Event, today Beck was more interested in what will lead to it and his key evidence is the clip from O’Donnell. Clearly, O’Donnell admitting to being a socialist is on the first step towards all of puppets and puppet masters letting their masks slip like the aliens in V.

Wait, V? The Event? When will the Left’s onslaught of unoriginal sci-fi series cease?!