Glenn Beck: ‘Liberals, You Were Right,’ We Should Never Have Gone into Iraq 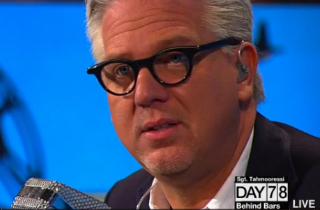 Glenn Beck led off his radio show on Tuesday morning with a stirring monologue about all the ways he believes the left and right can come together to “heal” America. As part of that, Beck suggested that perhaps all Americans can come together to recognize the blunder that was invading and occupying Iraq in 2003 — an act that he now regrets having supported.

After listing the Veterans Affairs Department scandal and the fight against Common Core standards as two ways in which the left and right can unite, Beck asserted that “maybe we could come together now on this nightmare in Iraq.”

He then took a contrite tone and admitted [emphasis ours]:

From the beginning, most people on the left were against going into Iraq. I wasn’t. At the time I believed that the United States was under threat from Saddam Hussein. I really truly believed that Saddam Hussein was funding terrorists. We knew that. He was funding the terrorists in Hamas. We knew that he was giving money. We could track that. We knew he hated us. We knew that without a shadow of a doubt. It wasn’t much or a stretch to believe that he would fund a terror strike against us, especially since he would say that. So I took him at his word.

[…] Now, in spite of the things I felt at the time when we went into war, liberals said: We shouldn’t get involved. We shouldn’t nation-build. And there was no indication the people of Iraq had the will to be free. I thought that was insulting at the time. Everybody wants to be free. They said we couldn’t force freedom on people. Let me lead with my mistakes. You are right. Liberals, you were right. We shouldn’t have.

He went on to declare that “You cannot force democracy on the Iraqis or anybody else,” largely because “If people vote for Sharia Law, they vote for Sharia Law.” Considering how many hundreds of thousands of lives, and trillions of dollars spent on the war, Beck put forward the idea that maybe we should never have gone in the first place.

For his conclusion, Beck said that Republicans need to listen to their non-interventionist instincts before “politicizing” Iraq and supporting another military action simply because of politics — i.e., because the president is a Democrat. “This has to become about the principles because in the principles we all agree,” he ended. “Enough is enough. Bring them home, period.”