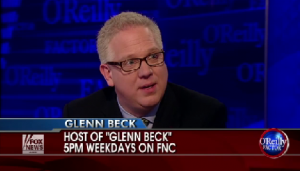 On Monday’s episode of his show, Glenn Beck promised viewers that bloggers were going to twist his words and claim he was connecting WikiLeaks and George Soros (even though he totally, kinda, sorta was). You can’t really blame bloggers for twisting anything this morning, now that Beck’s basically just out and out doing it. He appeared on The O’Reilly Factor last night to discuss the whole situation and, thanks to Bill O’Reilly’s pushing, gave some more quotes about the “spooky old man’s” possible involvement.

Again, Beck wouldn’t put Soros’s hand on the metaphorical trigger (computer mouse I guess), but would put it in the very near vicinity, like on the other side of the shooting range and giving a friendly wave. He repeated his assertion from Monday that Julian Assange’s attorney pro bono work for George Soros’ Open Society Insitute. Eventually though, O’Reilly asked the big question:

O’REILLY: Do you believe, in your heart – and I’m not gonna ask you to prove it – who you and I both believe is a danger to America-

O’REILLY: -is in bed with Assange, knows what his operation is, had a hand in it.

BECK: I don’t think he had a hand in it, but I think he absolutely knows what the operation is.

I don’t want to be another deceitful blogger putting words in Beck’s mouth, but, when half of his appearance on The Factor is about parsing out Soros’ connection to WikiLeaks, it’s pretty fair to say he’s implying a connection between Soros and WikiLeaks.

Of course, who knows. Maybe there is one. To paraphrase SNL, he was right about the Cyber Command.

Check out the clips from both The Glenn Beck Show from 11/29/10 and The O’Reilly Factor from last night – both from Fox News below: