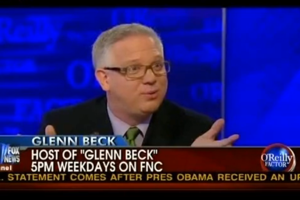 On last night’s O’Reilly Factor, Glenn Beck took a break from fighting his usual wars against Woodrow Wilson and the Progressive movement to answer Bill O’Reilly‘s questions on why he so rarely covers “culture war issues.” An example of why is Beck’s brand new upcoming special on Calvin Coolidge, but beyond that, Beck doesn’t seem too terrified by the prospect of same-sex marriage.

Beck argued that he was working on cultural issues, just different ones from O’Reilly– namely, getting Americans back to their faith, whatever faith that may be. O’Reilly called the effort “noble” but ultimately difficult to achieve, at least more difficult than fighting the good fight on issues like same-sex marriage and abortion. On the former, Beck retained his longtime (but not very well-known) stance that, for one, “we have bigger fish to fry,” and the debate was pointless because the government has no place in marriage to begin with. “I don’t think the government has anything to do with marriage,” he explained, “it is a religious right.”

O’Reilly challenged him on the changes this would mean for the “American family,” but Beck pointed out the difference between the two– “you’re willing to continue to go down the road of just accepting that,” he said, before being interrupted, possibly intending to conclude with “government and marriage are inextricably linked” or something of that nature.

Yet O’Reilly pressed again, asking, “Do you believe that gay marriage is a threat to the country?” Beck scoffed, smiled, and asked in faux-terror “Are the gays going to come and get us?” before making his final point on the matter: “I believe that Thomas Jefferson said ‘if it neither breaks my leg, nor picks my pocket, what difference is it to me?'”

He was much less lenient, however, on abortion: “Abortion is killing– it’s killing someone,” he argued, though he still doesn’t cover it often because “I believe in a symphony. If we’re all playing clarinets, we ain’t going to get very far.” Or, one again rephrased, for the same reason why O’Reilly isn’t covering the Coolidge presidency, a point he attacked O’Reilly on, to which the latter replied “Yes: Why have I been ignoring Millard Fillmore and Calvin Coolidge?”

Video via Fox News below: