Glenn Beck: MSNBC Will Be ‘Sacrificial Lamb’ In Exchange For Ending Fox News 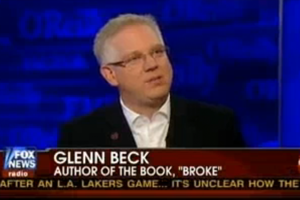 Senator Jay Rockefeller confessed recently that he’d prefer a world without Fox News or MSNBC. Naturally, it didn’t take Glenn Beck too long to find an insidious left-wing scheme boiling beneath the surface: the left, Beck told Bill O’Reilly in a special Thanksgiving visit to the Factor, is planning on “sacrificing” MSNBC in a quid-pro-quo negotiation to eliminate Fox News.

The conversation sprung from comments made by former president Jimmy Carter, who once again recently denounced Beck by name as an example of how the media can be counterproductive. Beck didn’t really seem to mind Carter’s comments, though he did take the time to note that “no one listens to Jimmy Carter” and no one ever did, “not even when he was President.” After laughing a bit at the former president’s expense (O’Reilly also mocked him for having “a book out every three weeks… more than [Beck], which I didn’t think was possible), the duo discussed several on-air errors they made and corrected them once again, in the interest of fairness. These included O’Reilly’s premature condemnation of Shirley Sherrod and Beck erroneously labeling former White House Green Jobs Czar Van Jones a “convicted felon.”

The the conversation veered toward Sen. Rockefeller and the impending Comcast/GE deal. Beck perceived the attacks on MSNBC from liberals as a sign of doom for the network given the new corporate proceedings, and suggested that the intent on the left was to make MSNBC a “sacrificial lamb” and hope that the right follows suit with Fox News. O’Reilly found the theory innovative and lended his support: “You’re very perceptive!” he cheered.

The dialogue on spelling doom for MSNBC as a corporation seems hyperbolic and immature at this point in the Comcast proceedings, though perfect bait for the anchors on the other side to bite.

The segment from this evening’s O’Reilly Factor via Fox News below: