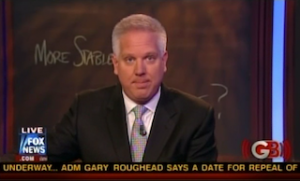 Glenn Beck had a lot to get off his chest today (so much that the show aired without opening titles). He clearly was not happy with the media response to his announcement to end his TV show as well as to the show itself. He promised his detractors that, if he’s wrong about his theories, they “can crucify [him] even more than [they] already have.” In his eyes, the main folks with the cross and hammers today were those at Good Morning America which did a segment this morning, partially blaming the show’s downfall on its “gloom and doom.” An incensed and misty-eyed Beck pleaded with his fans that that’s not the message he’s trying to impart.

First he listed all the things that he saw wrong in the world (the national debt, inflation, earthquakes, Islamists working with Socialists) and angrily joked how he could possibly have been such a “downer.” After that bit of defiance, however, he got serious. He sat down and addressed his fans directly, removing his glasses as his eyes seemed to fill with those tears that used to be so prevalent on the show, Beck clarified what he

“I started doing this show for a reason. To stop the cascading. I remember I was on the radio three years ago and I said, ‘Gang, get off of the highway! Get off of the highway. We’re passing all of the exits!’ We’ve had many exits. I don’t believe there are any exits left. What’s coming is going to be bad. Our reaction to it is what gets us off. All I’m trying to do is prepare you so can be a shelter for others, so you can help. Because a lot of people have been listening to these dopes on other channels.”

At the end of his monologue, Beck returned to Good Morning America and the critics and delivered this scathing rant:

Those same people that told you those things then are the same exact people telling you ‘Don’t worry’ today. ‘Don’t worry! These things won’t happen!’ I pray every night that they are right. But if they are wrong, hear me now. Please remember these words; If they are wrong, don’t worry. With God and values and principles and the Constitution and each other, if we stick to what has gotten us this far and we stick together, we will be fine.”

While I agree with Beck’s detractors (and, perhaps Beck himself) that the show has gotten stale as of late and that the “gloom and doom” tag is a simplified but apt charge, one would be hard pressed to call the top of tonight’s show “boring.”

Watch both sections of the show from Fox News below: