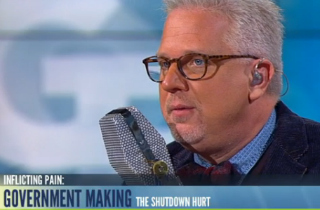 In a monologue on his radio show Monday morning, Glenn Beck asserted that by “intentionally inflicting pain on the American people,” President Obama‘s handling of the government shutdown has been that of a “dictator.”

Beck lamented that the media and the D.C. establishment have largely blamed the Republican Party for the shutdown, and that this week’s new theme is that the president will attempt to negotiate an end to the battle. “Now they are coming out and saying [the president] will negotiate, but it’s the Republicans’ [fault],” the radio host said.

Offering up several examples of government programs “inexplicably” affected by the shutdown, Beck suggested that Democrats are the ones “inflicting pain” while the GOP is “negotiating.” He cited the controversy over NIH cancer funding, the World War II Memorial brouhaha, the furloughing of military chaplains, the D-Day Memorial in France, and the “forcing out” of citizens living on public land, among others.

“This is a strike and a slap across the face,” Beck warned. “This, I’m warning you, America, this is the sign of a dictator. He is slapping you across the face and saying, ‘You will behave. You will do what I tell you to do or I will punish you.’ If your friends don’t wake up and see the nonsense and see what they are in store for, when you’re spending money to put cones on the highway so people can’t stop and even see Mount Rushmore, we get everything we deserve. And we are about to get a lot.”

Watch the monologue below, via TheBlaze: