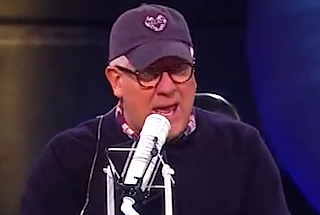 Fox News’ Howard Kurtz criticized President Barack Obama’s YouTube interviews as being “beneath the dignity of the office.” MSNBC’s Ronan Farrow defended them as proof that the president is “catching up” with the times.

Leave it to Glenn Beck to declare that spending an hour talking to three YouTube personalities has permanently damaged the office of the presidency.

He insisted that YouTube star GloZell Green was “used” as a “propaganda shill” by the White House, despite the fact that she did ask at least one relatively tough question about Cuba. Beck also went after CNN for failing to question the strategy, saying, “All the journalists there should be ashamed of themselves.”

“For us, it’s about the saving of the United States of America and the Western way of life,” Beck said later, comparing the YouTube interviews to Winston Churchill conducting interviews at “burlesque shows” in the 1930s and taking questions “while I squeeze her boobies.”

“The world is about to cave in. It’s obscene. It is truly obscene,” Beck concluded. “I don’t know anybody that can bring the dignity back to that office.”