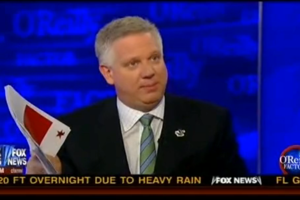 President Obama surprised many in the media when suddenly losing his cool on the Today show and admitting he was searching for “whose ass to kick” over the Gulf oil spill. Glenn Beck expected the language, he told Bill O’Reilly last night, because the president was getting pressure from far-left revolutionaries, and it was about time he spoke their language.

Beck argued that the expressive comments were not directed to the American people but, rather, advocates of “violent revolution” that were attending the “America’s Future Now!” conference in Washington, DC, such as– you guessed it– Van Jones. The troubling thing about his comments, he continued, was not the president’s strong language, but that “it is the fact that it is not the President’s job to kick anybody’s butt– it is to uphold justice, uphold the Constitution, get things solved.”

O’Reilly was not convinced, citing poll numbers that Americans wanted to see the President more active and more agitated about the situation in the Gulf. “I’m seeing Obama speaking directly to the American people that he’s a tough guy now,” he countered. But Beck replied that Americans did not want to see that kind of action, but, rather, a meeting with BP CEO Tony Hayward, who the President told Matt Lauer in the same interview that he had no interest in meeting, because he is “interested in action.” Beck found this conclusion to come from the same sort of thought process as racism: