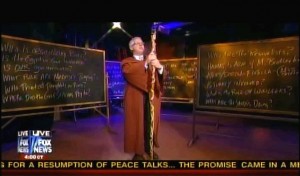 Yesterday we asked whether or not Glenn Beck had any solutions to go along with his unsettling theories on the current upheaval in Egypt. Today, he gave them (don’t worry, we won’t take credit). But first, for some reason, he dressed up like a wizard or Moses or a Renaissance Faire guest or something. We didn’t ask for that but, if we knew it was an option, we totally would have.

We’ll skip the wizard outfit (since, really, that image speaks for itself) and dive into the solutions which we got some of here and Beck promised we’d get more of down the road. They came in the form of a panel of guests who all are experts on the region, Islam, or the economy as well as being old friends of Beck’s. (Interesting side note: whenever Beck brings on a guest, have you ever noticed that there’s a 50% chance he’ll tell a story about the first time they met?).

Letting his guests speak first, hey all agreed that we it would be dangerous to get in bed with the Muslim Brotherhood, though Dr. Zhudi Jassar of the American Islamic Forum for Democracy stressed that it would be counterproductive to suppress to Brotherhood’s rights. Next Beck gave his thoughts, which you will have to watch below to see for yoursellf.

Yes, so Beck gave solutions. We’ll leave it up to you to debate whether or not they were useful. We will say, however, that the cape at the beginning was brilliant, even if he never explained why he chose to open his show with staff and cape. But if any of Beck’s critics fall into the clear trap of reporting on the goofy costume in the first few minutes of the show and not the substance in the last few minutes, you can be sure that Beck will be ready to pounce.

Watch clips of both sections from Fox News below: