Glenn Beck On Common Scandal: ‘The President’s Actions Clearly Indicate That He Is Anti-Cop’ 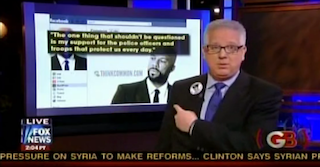 Jon Stewart, in the humble opinion of this writer (and judging by the Facebook response this post got, many, many other people as well) pretty much obliterated the silly controversy over the guests Michelle Obama invited to her poetry party last night. So, the “scandal” must be over now, right? I mean, Stewart showed clips proving that Fox News hosts had both misunderstood the lyrics of the rapper Common and had defended artists singing worse lyrics. Besides, Common and (fellow target) Jill Scott performed last night without incident. How could anyone possibly continue this debate?

Well, if you’re Glenn Beck, you could spend the first 10 minutes of your show repeating everything Sean Hannity’s said all week.

Sigh. Well, give the guy a break. He’s been out of town.

After summarizing Common’s connections to Radical Leftists and Bill Ayers (of course), Beck admitted that he hadn’t listened to any of the rapper’s catalog and that he may be wonderful. He then went to the heart of the matter: President Obama doesn’t like police officers. Why else would he allow Common to read a poem at the White House?

“The President’s actions clearly indicate that he is anti-cop. Now, you can do a photo-op all you want, which he did today. ‘Look at me, I’m with the cops.’ Yeah. Got a problem with that, Mr. President. ‘Cause it’s just like Bill Clinton when he said, ‘Monica Lewinsky, that scandal doesn’t matter. I don’t even know what sex is. I might have been sharpening a pencil, I may have been having sex. What do I know?’ It did matter because oral sex became no big deal to kids. The president influences our culture! The president sets the table and the standard and the standard when it comes to killing cops needs to be zero tolerance.”

Really? Seriously? The old “Bill Clinton introduced the nation’s youth to blow jobs” argument? Are we really still using that in the year 2011?

Listen, folks. I was in school when the Lewinsky scandal hit and the only thing teaching us kids about oral sex wasn’t the fact that our President had it. It was the fact that the media kept warning our parents that a “Blow job Epidemic” was sweeping the nation which led to our schools forcing us to sit through hour long Oprah Winfrey oral sex specials instead of gym class. Yes.

That really happend in my school.

But, fine, sure, lets go with this argument. So, I suppose Beck is saying that kids think the President is sooooo cool that just seeing him in the same room as a guy who once mentioned the name of a woman who was involved in the murder of a police officer decades ago in one of his songs will instantly inspire them to…what? Start killing cops? Hanging out with rappers? Joining the Weather Underground?

How about this; If you really think the President can influence kids that much, why don’t we see how many of our nation’s children suddenly get into poetry this week? I promise you, If I see a middle schooler downloading E. E. Cummings on their iPad this weekend, I’ll join you in your outrage.