Glenn Beck On “Crosshairs” Apology: “How Stupid Does CNN Think Their Viewers Are?” 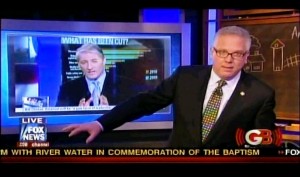 Last night on CNN, John King apologized for allowing a guest to use the word “in the crosshairs” and promised to try getting away from using such language while also suggesting viewers “hold us accountable when we don’t meet your standards.” This apology apparently did not meet Glenn Beck‘s standards and prompted him to suggest that King’s comment was the “dumbest damn thing I’ve ever heard on television.”

Beck was amused at how silly it was for CNN to be worried about the use of such a common word as “crosshairs” and wondered “how stupid does CNN think their viewers are? Maybe that’s why there are so few of them, because they insult them every single night.” For the rest of the segment Beck mockingly acted outraged at children’s cartoons that depicted violence and at “violent” analogies used by President Obama and other newsmakers, and warned CNN that if they go down this road they will have a lot of things to ban.

If CNN (or as Beck sarcastically referred to them, “the gold standard of news”) wants to be successful, then Beck suggested they “stop insulting the American people on a daily, hourly basis.” Beck explained Fox’s success as a result of Fox not treating their viewers like morons, and jokingly suggested that in the future he would refrain from ever using the word “bullet points” again.

Clearly tired of the heated rhetoric issue, and having to defend his own part in the ongoing debate, Beck humorously unleashed on the stupidity of a continued focus on what words we shouldn’t say, when in fact so many more serious problems deserve the media’s attention.