Glenn Beck On The Jay Leno Show: Both Parties “Betrayed The Country”
video

Glenn Beck On The Jay Leno Show: Both Parties “Betrayed The Country” 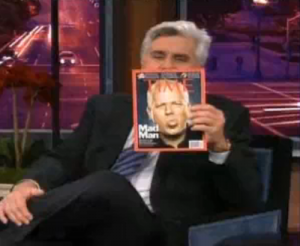 Welcome to prime time, Glenn Beck. The Fox News host took a quick trip to Studio 11 in Burbank, California on Friday night, appearing on The Jay Leno Show to discuss his whirlwind year and political affiliation, as well as bake his grandma’s sugar cookies.

Earlier on Friday night, Beck tweeted the following message from his oft-ignored Twitter account: “Tonight 20minutes with jay leno. We flew out, did the show And now flying right back. Think of the co2! Was it worth warming the globe? 10p.” And what a show it was.

Here at Mediaite, we’ve tracked Beck’s every move — from his own trail of tears and 9/12 to a talk with Barbara Walters — and judging by tonight’s interview, the man does not seem to be letting up any time soon.

During his turn on Walters’ Most Fascinating People special, we commented on the strangeness of “seeing Beck out in the real world, outside the vacuum of his nightly show, interacting with other mainstream media types.” Tonight was a similar experience as Leno welcomed the “popular and controversial broadcaster” to his nighttime show for a little chat.

Clad in a purple tie and barely matching button-down, Beck strolls out to audience applause and Leno starts right off, calling Beck a “polarizing figure” — a claim Glenn denies, playing humble and coy. Beck speaks of background and substance abuse problems — getting grave for a minute before shaking off a burning question Leno tries to sneak in:

“What party do you align yourself with?” Leno asks. Beck makes a Christmas party joke, before commenting, “I hate both of them really. They both betrayed the country, I think.” I’m a liberatarian, Beck says. “I voted for Joe Lieberman, I voted for George W. Bush — both of which I regretted.”

“We have an honor problem. We have a truth problem in the country,” he continues, sounding fairly reasonable throughout. He admits reluctantly that Hillary Clinton would have been his candidate of choice over John McCain but puts it poetically: “That’s like, gee, do I want to hang myself or shoot myself?” Then he plugs the moms and dads in the Tea Party Movement and 9/12 party.

Leno attempts to play sober realist to Beck’s grandiose populism, even making a fair case in Beck-ian terms for President Barack Obama, but it basically becomes a charm-off, and like most nights, Leno falls short. To be fair though, it might be Leno’s best interview in recent memory, if only because they both come off likable enough. But hey, it’s Glenn Beck’s world and we just live in it.

Check out the entire clip below: