Glenn Beck On Trump: ‘The Last Thing The Country Needs Is A Showboat’ 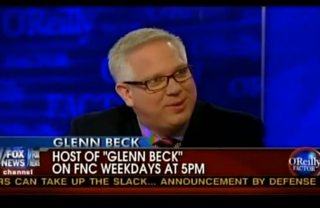 Don’t think that, despite continuing to tackle his gigantic multi-organizational/one-world-government themes that Glenn Beck has not noticed the Great Donald Trump Media Takeover of 2011. On his regular segment with Bill O’Reilly last night, Beck gave his less-than-glowing review of the possible Trump presidential campaign, expressing concern that a “showboat” hijack the 2012 elections.

After initially teasing O’Reilly by claiming that he was “dismissive” of Trump, Beck began his analysis in a positive light, calling Trump “a guy who gets things done” and someone he “really respects,” but still confessing that he has “made me a little uncomfortable recently.” O’Reilly rebutted by approving of Trump’s harsh language on China and the economy, which was precisely what concerned Beck. “the whole ‘I’m going to go pound China’… you can’t just go pound China!” he complained, which, to the casual Beck viewer may be surprising given his national debt fears, but is rather consistent with his ideology. Amidst much of the theater the consistent looming threat of America falling under that defines his program, it is easy to forget that Beck is first and foremost a libertarian, which means a lot of Trump’s neo-conservative “to the victor go the spoils” invasion talk just doesn’t sit too well. And the birther talk, when Trump, “releas[ed] a birth certificate worse than Obama’s,” appeared to be another layer of self-parody that pushed Beck away.

Then there’s the “showboating,” which really bothers Beck. “that’s the last thing the country needs is a showboat. You don’t want me as President of the United States,” he joked. O’Reilly countered this claim by noting that Trump is “getting a massive amount of attention quickly,” and that, as a candidate, Trump would “shake things up, and that’s good.” Beck agreed, though lamented that no one could “shake things up by not stating things provocatively.” O’Reilly failed to skip a beat at pointing out the irony in the statement: “then we’d be off the air!”