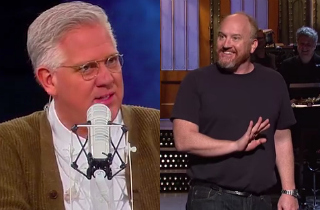 Louis C.K. may have faced some mild backlash for his stand-up routine about being “mildly racist” on last week’s season finale of Saturday Night Live. But one person he managed to impress with his commentary on race in America was Glenn Beck.

On his radio show Friday, Beck revisited what he called a “really brilliant, very dangerous, kind of sick” bit that “says something about our society.” For instance, in one clip he played, Louis C.K. mentions that if he were to encounter a pizza shop run by four black women, he would take note. In a way, Beck seemed a little jealous that the comedian can “say the things that none of us are able to say.”

“He is saying things that no one in their right mind would say now, because they’ll destroy you,” Beck added. He contrasted Louis C.K.’s “mild racism” with the type of every racism he sees President Barack Obama (along with First Lady Michelle Obama) talking about in the wake of police killings of unarmed black men.

RELATED: Catholic League President: Why Does Louis C.K. Have ‘Child Rape on His Mind?’

Essentially, Beck is using Louis C.K.’s comic admission about noticing differences between races to argue that actual racism does not exist. But it is quite a stretch to think that is the point the comedian was trying to get across in his set.

And watch Louis C.K.’s full SNL set below, via NBC: