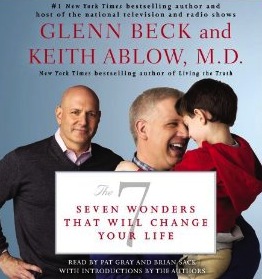 Well, everyone else has already said it about Glenn Beck’s new book, “The 7: Seven Wonders That Will Change Your Life,” so it was time for him to just admit it: the cover is really, really gay. Not “gay” as in “an unfunny joke in a Vince Vaughn movie” gay. No, “gay” as in “if I didn’t know who Beck was I would swear this is parenting book for partners in a longterm homosexual relationship” gay. Today on his radio show, Beck admitted he knew what it looks like and “doesn’t care” after receiving a healthy amount of joshing from the rest of the Glenn Beck Program team.

Co-host Pat Gray started things off by helpfully reminding listeners that, while (to paraphrase Seinfeld) “there’s nothing wrong with gay parenting manuals,” the book doesn’t actually specialize in parenting tips for gay couples even though its cover features Beck’s son and two men “in Mr. Rogers sweaters.” Beck helpfully explained that co-author Dr. Keith Ablow was added to the image later and that he wanted the cover the way it was because the book isn’t about politics but, rather, about “being happy and finding yourself.”

While everyone agrees that families of any orientation could get something out of the book, Stu Burguiere pointed out that that would probably be clearer if it had a little sign on the cover reading “straight people can buy this too.”