Glenn Beck Questions Political Timing Of Bin Laden Killing: ‘I Don’t Count Anything Out’ With Obama 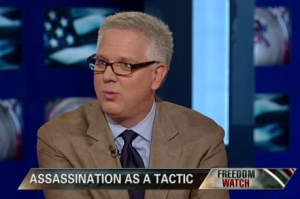 Last night Judge Andrew Napolitano invited Glenn Beck on his show to discuss whether in light of Osama bin Laden’s killing, could the President now order the targeted assassination of anyone he wants around the world? Yet much like the previous night, the conversation quickly became consumed with Napolitano asking Beck to respond to his speculation about potential theories of what really might have happened.

Napolitano claims that some reports suggest the Obama administration knew Bin Laden’s location in Pakistan since August, and asked Beck “did they time it for when the President’s poll numbers were worst?” At first Beck avoided engaging in such dialogue, instead focusing on how uncomfortable it made him feel to see people in the streets joyously celebrating Bin Laden’s death, when for him it just re-opened old wounds. However, Beck later became comfortable with the public showings, realizing Americans are “so desperate to feel good for something.”

Napolitano then asked, without a photo of Bin Laden’s body, how do we know he’s dead? Beck replied “you don’t . . . but I believe in this particular case he’s dead,” and then smartly suggested people who doubt Bin Laden’s death would never be satisfied with a picture anyway since they would claim it was doctored. Just when it seemed like Beck escaped the segment without contributing to Napolitano’s increasing conspiratorial tone, Napolitano repeated one last time his question of whether Beck thinks this assassination may have been “politically timed.” Beck finally relented, seemingly almost to please his self-described “mentee” and replied, “I don’t count anything out with this administration.”