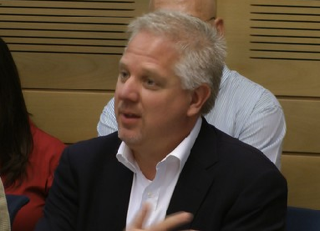 Last month, it was reported that in anticipation of his August “Restoring Courage” rally in Israel, Glenn Beck would be sitting down before the Israeli Knesset’s Immigration, Absorption, and Diaspora Affairs Committee, raising many questions as to what he would say and how he would be received. Introduced by an extremely appreciative Knesset Member Danny Danon, Beck explained that his rally was meant to inspire America to learn from Israel, and quoted the Bible to express his solidarity to the nation.

Danon, deputy speaker of the committee and member of the Likud Party, thanked Beck greatly for his work for Israel, saying that if Israel had no Glenn Beck, “We would have invented a Glenn Beck, because we need more people like you.” He also explained the invitation in the first place, which came to some as a surprise:

“We invited Glenn Beck to our committee because he has done such a wonderful job of explaining the basic truth on his programs,” said Danon, the Knesset’s deputy speaker. “Israel has always been and always will be the homeland of the Jewish People, and any attempts to delegitimize this right should not be accepted by fair and free people around the world.”

Beck, for his part, began by apologizing to the committee for not wearing a tie, and then proceeding with his presentation, arguing that “politics as we know it is over” and that America had much to learn from Israel. “The media is skewed [in America],” he joked, “I thought you could only cook your food over a burning bus.” He went on to explain the American reaction to 9/11 and the “normalcy bias” that made Americans more vulnerable to ignore attacks, and quoted the Book of Ruth to express his solidarity with the Israeli people: “Where you go, I will go; where you lodge, I will lodge; your people are my people; your God is my God; where you die, I will die.”