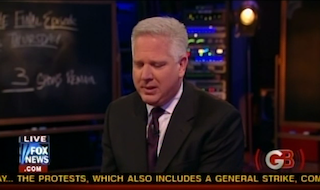 “This isn’t an ‘Oh, poor Glenn’ story,” Glenn Beck said as he repeated his tale of being mocked and jeered while attending a movie in New York’s Bryant Park with his family last night. “It’s just a way to show you have to have courage.” Today on his show, Beck, clearly distraught, told the story again, wrapping it into his current message of courage and strength against a mob that is intent on shutting you down.

On his TV show, Beck split the story between two segments and had it follow tales of courage from military veterans who had been horribly injured in battle. Obviously, Beck made sure to point out that his story wasn’t really comparable to those. However, that doesn’t mean he wasn’t very upset. The recounting again brought tears to Beck’s eyes. Once as he discussed the conversation he had with his daughter afterwards and again as he thanked his audience for never showing the rage he claims to have seen last night.

In the lively comments section on our initial post this morning, some have cast doubt on his story, saying the attention he received (people whispering, taking pictures) is no different than any celebrity would receive if they ventured into such a densely populated public area (and if you look at some of the pictures, which we won’t link to here for the sake of the privacy of Beck’s family, you can see that it really was insanely crowded). Some have said that, were any serious altercation to have actually occurred, it would instantly have been written about on Twitter or Facebook by someone at the park. The fact that there seems to be no such mention on various social media platforms doesn’t prove that Beck is exaggerating, but its also not an unreasonable argument.

We at Mediaite contacted one of the Twitter users who tweeted about sitting near Beck and his family and she told us she didn’t witness any of the hostility Beck describes. She said that, in fact, she saw people going up to shake his hand and that the only real jeers she heard were directed at a group doing fake acrobatics sitting near him. She also said she believed he had two security guards sitting right by the entire time.

All that being said, there’s no doubt that people were taking pictures. We can see those. We can also safely assume that people were whispering and pointing. Whether or not this attention was politically motivated as Beck feels it was is against the point. If a person is spending time with their wife and children and a group that large is beginning to focus on you, that would have to be unbelievably terrifying for anyone.

It’s a sad thing that public figures can’t enjoy their lives like anyone else. If Beck (and especially his family) did receive extra negative attention purely because of the opinions he holds, that’s even sadder.

Watch the clips from Fox News below: