Glenn Beck Responds To 2006 GMA Video: “We Must Be Close To Winning The Fight” 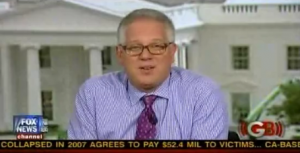 Earlier today, a video started making the rounds of Glenn Beck seemingly endorsing “Ground Zero Mosque” proponent Imam Feisal Abdul Rauf. Beck responded to the video on both his radio and Fox News show today and he wanted his viewers to know that he is completely unfazed. He’s so unfazed, in fact, that he sees the prominence of the video on sites like Media Matters and the Huffington Post as proof that he and his fans are “winning the war.”

Really the video is neither as important or as unimportant as the two sides would like to make it. On Fox News, Beck pointed out how ridiculous it is that the left is pointing to his “sure, sure” comment in the segment as a sign of endorsement. That’s true. However, the MM and HuffPo stories were focusing much more on the bit where Beck mentions “good Muslims” and then gestures towards the Imam. That’s the endorsement they were talking about and Beck stops the clip on his show before that part.

But does that make Beck a hypocrite. No, not at all. This was 2006 and something tells me that the Imam didn’t lean over to Beck in the green room and say, “Gee, these snacks are great. By the way, I’m totally going to propose building a Islamic community center right by Ground Zero in a few years.” So, Beck thought the Imam was an ok guy in 2006 and now he doesn’t based on things that have happened since. That’s allowed. It’s not like the Laura Ingraham/Daisy Khan video.

As much as folks like Beck might not like it, saying that Conservative pundits are pushing this story more for political gain than for any big moral stand is a perfectly legitimate argument. However, it’s an argument that requires more than a four year old video of Beck being polite on a TV show to prove it.