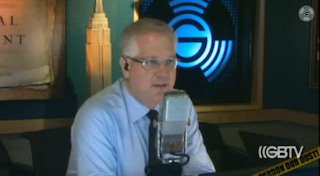 This weekend, Van Jones, the bald-headed Lex Luthor to Glenn Beck’s slightly less steel-y Superman, offered up an excoriating critique of Fox News as well a challenge to Beck to debate him on one of his last shows, a debate which we can only assume would turn into some kind of competitive Martin Luther King, Jr. quote-off. This morning, on his radio show, Beck responded to the challenge, claiming the speech was a clear sign that Jones and his like were becoming deranged and that the “mask of the left” was coming off.

Gee, Glenn. Van is only trying to help. This is where the narrative of your show has been leading all along. If you guys don’t debate it would be like The Fugitive ending without Dr. Kimble fighting the one-armed man!

Beck and his co-hosts went through audio of the challenge bit by bit, making sure to point out every time Jones’ voice got raised as clear proof of just how terrifying and threatening he was. (However, they notably cut out the clip where Jones talks about how much he loves Popeye cartoons. I guess that part was less scary.) They gave their rebuttal to every thing Jones said including his condemnation of Beck’s smear attacks against him. Beck and company argued that they have never made any smear attacks because everything they said was true which isn’t really the definition of a smear attack but whatever.

The long and the short of it though is that Beck didn’t accept the challenge itself. He barely responded to it which, I suppose, is as good as declining outright. Rather, Beck focused on the part where Jones claims he “loves” Beck as a brother and, instead of pointing out how silly that is, fought back by claiming that he totally loves Jones too! Heck, he loves him better!

Ok, forget what I said about the MLK quote-off. A debate between these guys would probably just be an hour of two grown men trying to see who could hug each other better.

Strangely, that would still make for a pretty suitable finale.

Watch the clip from GlennBeck.com below: