Glenn Beck Revives The Ghosts Of The Waco Tragedy 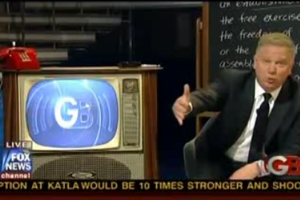 Glenn Beck has still obviously not gotten over being called seditious and compared to Timothy McVeigh. Yesterday, it was Joe Klein’s turn to incur the wrath of his ’50s TV fireside chat; today was Bill Clinton‘s. And if the left could get away with comparing him to McVeigh, Beck seemed to figure, he was going to turn the tables on them and compare Oklahoma City to the tragedy in Waco, Texas.

Beck opened the show with his bread and butter– images of the peaceful Tea Party protesters he claims the left are consistently trying to brand as violent and dangerous. “The media, it seems,” he noted, “has picked a side.” If the Tea Parties were so violent, he asks, why was there not even a “good old-fashioned pistol-whipping” at the pro-Second Amendment rally?

The reason the left can get away with blaming the right for violence and staining them with the memory of McVeigh, he argues, is that “we forget our own history, so it can be used against us.” Then he uses some of Bill Clinton’s ugliest history against him: Waco. The Waco disaster– where the Alcohol, Tobacco, and Firearms Bureau burnt a Branch Davidian ranch to the ground with more than 60 people and two dozen children in it– was one of the greatest failures of the Clinton presidency, and directly had an impact on McVeigh as he hatched his terrorist plan. It also celebrated an anniversary yesterday, and if Clinton is willing to use the Oklahoma City bombing against Beck and others like him, it seems Beck is more than happy to bring up Waco in the current debate, too.

Beck clarified that he didn’t hold Clinton accountable for Oklahoma City– “only one thing caused Timothy McVeigh: Timothy McVeigh”– but reminding the American people of something Clinton tried so hard over the past two decades to sweep under the rug must have hit him where it hurts the most: his legacy.