Glenn Beck: Saving Burning Home In Tennessee Is The Fire Equivalent Of Obamacare 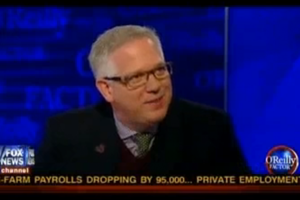 Glenn Beck and Bill O’Reilly had a different sort of politics to talk about on the former’s weekly visit to The Factor yesterday. O’Reilly cornered Beck on what he would call “culture warrior” issues: the rights of the Westboro Baptist Church to protest and the Tennessee home that firemen watched burn to the ground because it’s owners opted out of the town’s fire insurance program. On the latter, Beck went after O’Reilly for defending the homeowners and, indirectly, Obamacare.

Over the Westboro Baptist Church, there seemed to be little discussion as to whether their actions at the funeral of veteran Matthew Snyder were objectionable– both Beck considered them “despicable” and O’Reilly agreed that “in spirit, everyone knows… they’re vile people.” Where Beck and O’Reilly disagree is on their constitutional rights. Beck noted that “where I get concerned is when people say that they don’t have the right to gather across the street and say despicable things,” to which O’Reilly countered that he considered the “tort of intentional infliction [of emotional distress] overwrites freedom of speech in this case.” Concluding this argument, O’Reilly declared himself the winner.

On the Tennessee home that burnt down because their owners hadn’t payed the $75 fire insurance fee, O’Reilly had a simple solution: save the home and charge the family in full for the service, rather than the lower fee that comes with membership to the insurance group. Beck called this solution “Obamacare” and lauded the firemen for letting the home burn down: “I don’t know how they stood there… but they had to.” Regarding the Obamacare comment, he made parallels between fire and health insurance and noted that the Obamacare system would allow those who are sick to buy health care on the spot rather than allow them not to buy insurance at all.

O’Reilly’s conclusion on that discussion? “I win; you lose.” Somehow that just doesn’t seem fair.

The video from last night’s Factor via Fox News below: