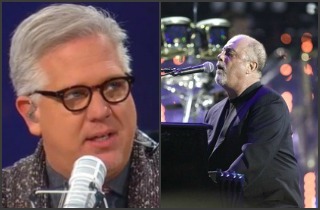 Glenn Beck is not happy with rock legend Billy Joel, and on Thursday evening he took to Facebook to air his grievances.

Beck attended Joel’s concert last night at the American Airlines Center in Dallas, Texas, and came away unhappy with the Piano Man’s performance as well as the entire experience.

“Left billy Joel early. Disappointed,” Beck wrote on Facebook. “Was it the fact that he was 90 minutes in before he played one of his real hits?”

Other complaints: Joel “meandered and seemed to talk to the band more than the audience,” and there were “just too many fall down drunk people in a very tight row.”

“I wished I were home with my wife and kids instead,” Beck added. “There are too many demands on our time and things are way too expensive to stay for someone who, as good as he is, seems to be phoning it in.”

“Sorry billy. I literally have every album you have ever made [Ed. note: Even Fantasies & Delusions? Whoa.], I have seen you five times,” he concluded. “I hope it was just us and we were the ones having an off night.”

As for Beck’s assertion that Joel didn’t get to any real hits until 90 minutes in, well… the setlist wasn’t that bad. “A Matter of Trust,” “Pressure,” “Movin’ Out (Anthony’s Song)” were all charting hits in their time. (Then again, to your humble scribe who grew up listening to classic rock radio on Long Island, even Joel’s non-charting singles seem like massive hits due to their constant airplay.)

But, yes, it did take Joel 18 songs to get to “Scenes from an Italian Restaurant” (which was never released as a single) and “Piano Man,” both of which are usually reserved for the moment the audience is sufficiently lubed up for a drunken singalong.