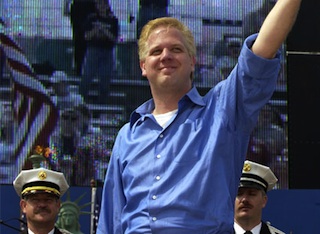 Guess what? It appears the Rally to Restore Courage isn’t the only big thing Glenn Beck has planned (does that guy ever sleep?). He appears to be planning some kind of big “charitable initiative.” How do we know this? Well, apparently one of his assistants, while working on it, annoyed a Episcopal priest in New York who’s written a blog post on the interaction.

The priest, Jennifer Linman, runs a homeless feeding program and was contacted this week by one of Beck’s assistants asking if he could volunteer there next Wednesday. Linman was curious why her program was selected and was told that it was because they treated their guests with “dignity” and that it didn’t look just like a “regular soup kitchen.”

Linman wasn’t sure Beck would mesh well with her left-leaning volunteers. However, she thought it might help get the word out about the program and, after checking with those in charge, responded that Beck could attend in late June (they were all full up until then) and that he couldn’t film the guests in the actual eating area.

“I called Tiffany, pretty sure that this wasn’t going to work for her–but if his real aim was to help, as she claimed, it was a good offer. This way he would be helpful. Showing up next Wednesday with cameras would not be helpful.

I never even got to the ‘no camera’ part–by the time I said it needed to be later in June, her answer was ‘That’s not going to work. We need this for the June 7th launch.’ ‘What happens on June 7th?’ A pause. ‘Oh. Well, you’ll hear all about it because it’s going to be really big. It’s the launch of Glenn’s new charitable and political initiative. And now you’re really going to miss out. It’s very disappointing.’ And with that, she was gone. So much for unspecified future projects.

So Mr. Beck, in case you ever read this, know that you are welcome to volunteer at our homeless feeding program–just like everyone else. We’d love to have you. We’d love to have you come to our fundraising auction on June 10 and help us raise money to feed the 120 souls who come through our doors every Wednesday. We’d even love you to come here with a camera and do a story on homelessness and hunger. But our feeding program isn’t just a backdrop to make you look good. If you really want to ‘roll up your sleeves’ and make a difference, come on by, and you will be welcome. And over time, that might make you look good.”

Personally, I think Linman, who describes herself as a “hopeful cynic,” is being a little unfair to Beck. She says she knows him mostly through The Daily Show so she’s seen some of the crazier aspects of his show, but he’s certainly also spent a lot of time and effort trying to start honest charitable initiatives. Besides, if he’s trying to start something big, there’s going to be a schedule and he has to find a place that can accomodate that. That being said, if her account is accurate, the assistant does sound a bit snotty.

Oh, well. It’s still a funny read and we’re certainly interested in what this big new trick under Beck’s sleeve is. Any other New York area soup kitchens heard from him recently?