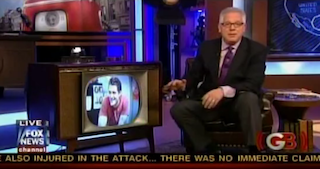 The entire message of today’s Glenn Beck was that our children are in terrible, terrible trouble. Every day, they’re being indoctrinated by Commie teachers, fashionable Che Guevara t-shirts, and the grinning, gaping maw of Al Gore. Sure, all of these examples are horrifying, but there is one cruel scourge that got a special mention from Glenn Beck. This menace is one that stalks our children so tightly, that it’s like the minotaur creeping through the labyrinth. It’s so evil, that that the very fires of Hell feel cool to the touch after standing in its presence. It is so absolutely terrifying, that Beck himself admitted to being kept awake, shivering as he pondered its sinister “brilliance.” I speak, of course, about television sensation and iTunes marketing machine, Glee.

Beck warned his audience of the unstoppable force already upon us with the grim resignation of the doomed men of the Alamo.

“I don’t know if you’ve ever seen the TV show Glee, but this show stands out and stands against almost every value that I have. I’ve seen this show twice and this year and I’ve watched it in stunned horror combined with a sense of admiring awe. It is a brilliant, brilliant show. Very well done. But it is a horror show.

Yes, Glee is a clear signifier of the end of times. But, why did Beck still lavish praise upon it? He must have used the word “brilliant” 20 times in the segment. Well, because the best propaganda is hidden. It disguises itself amongst a bounty of earthly pleasures. Also, I guess, a Fox News show can only diss a Fox Entertainment hit for so long before it becomes rude.

Anyway, what is the scene that gave Beck his one, Christ-like moment of doubt? Was it one of those oft-cited examples of Glee trying to persuade audiences that the gays are humans too (or at least as close to a human being as any character on the show)? No, it was worse. This scene contained the physically attractive and relatable demons of the cast singing a seductive siren’s song by My Chemical Romance about the dangers of corporations. Yes, Glee is clever enough to turn our children against capitalism with that which they hold most dear; terrible pop punk music.

Just take a look at the Marxist lyrics below which Beck made sure to highlight:

“Cleaned up, corporation progress
Dying in the process
Children that can talk about it
Living on the railways
People moving sideways

Sell it till your last days
Buy yourself the motivation
Generation nothing,
Nothing but a dead scene
Product of a white dream”

What child wouldn’t see through those brilliantly constructed metaphors and get the message festering beneath? Why, it’s what Bill Ayers himself would write if Bill Ayers was also a man in his mid-30s who dyes his hair hot pink and plays “punk” music for tweens. Yes, this song was clearly chosen by the producers of Glee to sway our children against American values and not at all because it was one of the biggest hits off the band’s most recent album and was therefore likely to sell a veritable ton of downloads on iTunes which is run by Apple, a corporation they so clearly despise.

But there is hope, dear friends. It is a faint flicker in a sea of blackness, but it is there. Beck mercifully followed this descent into catchy, colorful, queer-friendly barbarism with the inspirational story of his chief of staff Joe Kerry. When Kerry was a boy, his mother threw out the family television, thus saving he and his siblings from a life of protesting stuff and watching the Lea Michele’s of the day sing evil Top 40 hits. Perhaps we too should dispose of the devil box before our children are longer our friends. They’ll be our comrades.

…of course, wait to throw the set out for a few months. The Glenn Beck show is off the air yet.

Watch the clip from Fox News below but, be warned, you should probably keep a Constitution present so as to protect yourself from second-hand indoctrination.