Glenn Beck: The History Of Bacon (And How It Relates To The End Of America) 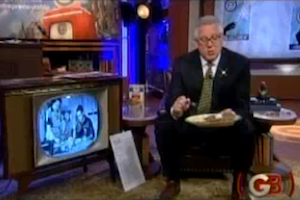 Today’s Glenn Beck was kind of like an episode of Mad Men but with less Christina Hendricks and more Glenn Beck eating bacon. It all had to do with a history lesson on Edward Bernays, the “father of public relations” who used propaganda to manipulate the subconscious and revolutionize marketing. Bernays, Beck explained, thought people were but animals and needed to be trained as a group. Beck doesn’t feel that way, however, he kind of made himself hard to side with by telling a bunch of stories that made Bernays sound like a super awesome Don Draper.

The first story was all about how Bernays was hired to help a company sell more bacon and so he got a doctor and basically invented the idea of breakfast as the most important meal of the day and the egg and bacon meal as the perfect dish. It was a fascinating tale, but you’re probably wondering what on earth it has to do with anything? Beck himself kept having to remind viewers that it would all make sense soon. And soon it did.

You see, Bernays used psychology in his work because he learned from his uncle, Sigmund Freud. And you know who else knows a lot about psychology? Cass Sunstein, the Regulatory Czar! And, as Beck points out, Sunstein isn’t just trying to get us to eat Quaker products. Oh no!

This is chilling stuff that’s bound to make viewers think. At the very least, it’ll make them really hungry for bacon.

Check out the clips from Fox News below: