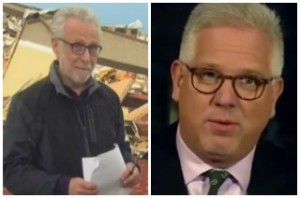 Most people who saw Wolf Blitzer‘s instantly viral interview with a atheist Oklahoma tornado survivor thought it was just Wolf being Wolf, casually asking someone if they “thanked the lord” without stopping first to wonder if that person believed in God. But Glenn Beck saw something slightly more sinister afoot.

On his show last night, Beck offered up his own theory of what really happened Tuesday afternoon in Moore, Oklahoma. He prefaced his “observation” by saying, “I really like Wolf Blitzer and I think he’s a really good man.” But he found Blitzer question about “the lord” “peculiar in the way it was stated, even for Wolf, who I think is a religious man.”

Beck posited that Blitzer was purposely fed him false information about the woman he was interviewing before the segment by “some producer who is sympathetic to the atheist plight or just doesn’t like Christians.” He thought perhaps the anonymous, scheming producer just wanted to “point out that in the middle of heartland in America, where most people are God-fearing, there are atheists there too.”

This led Beck to a more ominous conclusion than most about the state of the country. “We are not fighting against flesh and bone,” he said. “We are fighting the forces of spiritual darkness and it doesn’t matter what people’s intent are, but I will tell you that that was there for a reason.”

And in case you haven’t seen Blitzer’s original interview, watch it below, via CNN: