Glenn Beck to Bill Maher: I’m Not Coming on Your Show

Glenn Beck to Bill Maher: I’m Not Coming on Your Show 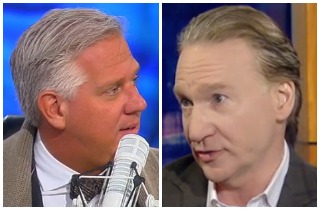 Just a few weeks after openly hoping to have a “civil dialogue” with Real Time host Bill Maher, Glenn Beck no longer seems to want that meeting to take place.

On his Facebook page Sunday, Beck responded to an interview Maher gave to Tuscon Weekly. In the interview, Maher rejected the idea that his views on Islam are comparable to Beck’s.

“Glenn Beck is more on the Ann Coulter page that what we should do is conquer the Middle East and convert them to Christianity,” Maher said. “That’s not what I’m saying. I’m saying all religions are stupid. Islam just happens to be the one right now, in this century, that’s most dangerous and violent.” Maher said, though, that he’s willing to appear on Beck’s program if Beck will in turn appear on Maher’s.

Beck pushed back on his Facebook, saying he doesn’t want to convert Muslims. “There is no winning in this game,” Beck wrote. “We can move the world forward, but never in name calling and belittling others. It was played in the beginning and will be played until the end.”

This is why I won’t accept an invite on his show. I want an actual discussion. One based in respect. One that I think can actually help reknit the fabric of our country and world,

I think Bill wants to discuss things but he also wants to “win” and he really wants a good show.

I don’t blame him. I used to live somewhat in that world. Then I woke up.

Previously, Beck had said of Maher that, “Maybe we should start talking to each other.”