Glenn Beck to FLOTUS: How Dare You Talk About Racism When White People Voted for You!
VIDEO

Glenn Beck to FLOTUS: How Dare You Talk About Racism When White People Voted for You! 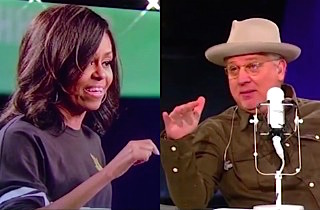 During a commencement address at Tuskegee University this past weekend, First Lady Michelle Obama talked candidly about how race has played a factor in the media’s perception of her as a public figure over the years. Apparently, this was just too much for Glenn Beck.

Pointing out that President Barack Obama could never have been voted into office with just the 11% of the U.S. population that is African-American, Beck said on his radio show Monday, “White people in droves, went out to vote for you, and you were somehow or another invisible so much that you became the president and first lady of the United States of America? Tell me about the troubles that you have seen!”

After playing a portion of the speech in which the first lady talks about feeling the “stings” of racism throughout her life, Beck chimed in, sarcastically, “Nobody else has.”

Beck stressed that he is not comparing the plight of the religious, conservative white man to what black people suffered in the time of slavery or even what Dr. Martin Luther King, Jr. faced during the Civil Rights Movement. “But we are not the country of Martin Luther King’s time any more!” Beck exclaimed. “We are being dragged back to those days.”