Glenn Beck to Oprah Winfrey: ‘You Disgust Me’ 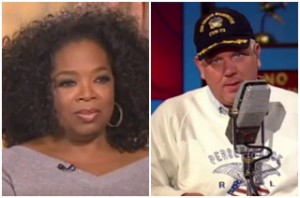 Last week, Glenn Beck called Oprah Winfrey “evil” for comparing Trayvon Martin to Emmett Till. And after Winfrey repeated the analogy on Anderson Cooper 360 last night, he is at it again. On his radio show this morning, Beck declared, “Oprah Winfrey, you disgust me.”

“As a woman, who has gone through hell and back and made it, and pulled yourself out by the bootstraps, you made it.” Beck continued. “You grew up with hate from your own race, you grew up with rape in your own race,” he said, referring to her history of sexual abuse. “And the American people, both black and white, yellow and red, it doesn’t matter the color, they saw you make it! They saw you overcome everything you had faced, and we celebrated that!”

Calling Winfrey “the most famous and most accomplished black woman in the history of America” he said the reason she has her own television network today is because “we celebrated that you made it.” But now, after her recent comments, Beck said, “you disgust me.”

“Oprah, I choose to be the person that America thought you were,” Beck solemnly declared, before going on to paraphrase the motto on the Statue of Liberty. “Give me your tired, your poor, your huddled masses yearning to breath free,” he said. “Give me the ones that you have told ‘you’ll never make it.’ Send them to me. The tempest-tost, because I hold my lamp beside a golden door.”