Beck To The Media: How Can You Possibly Deny What I’m Saying At This Point? 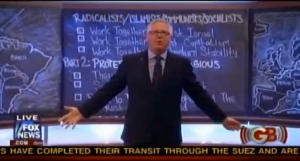 Glenn Beck announced today that out of the many people on TV who “don’t believe a damn word they’re saying,” he’s one who does. Using the anti-Fox News protesters that were, at that moment, demonstrating outside his building as further proof that the Perfect Storm he’s been warning against was nearly at hand, Beck took the media to task, yelling at them for not giving the people “the truth.”

Beck frequently accuses his critics of not actually watching his show. However, with the volume level he reached during today’s episode, it’s safe to say that some of the protesters outside at least heard it this time.

Here’s what he had to say when he really got on a roll about the media:

“It is difficult to deny at this point, isn’t it? Isn’t it? Is it a little hard to deny that radicals, Islamicists, Communists, Socialists will work together against Israel, against Capitalism, and they’ll try to work together to overturn stability? Who in the media is telling you this? Who? Name them! Where are they? How can they possibly deny it at this point? And why wouldn’t they tell you these things? Why?”

It wasn’t just the media that was lying to people. It was all the leaders that are working towards a New World Order. Beck wanted to know what this new order actually was. He guessed that people wouldn’t spell it out because they know you, the American people, wouldn’t like it. He then listed all the possibilities that it could be (none of them were very good). And, in the end, he asked President Obama why he wouldn’t stand against these people.

Today’s episode fits the same theme as the past few Glenn Beck shows: “they all said I was crazy but, look around. I’m right.” However, this one didn’t have much of the smugness that’s dominated his performance the past few evenings. No, today Beck was very, very angry.

Check out the clip from Fox News below. You should probably lower the volume once you get around the two minute mark.