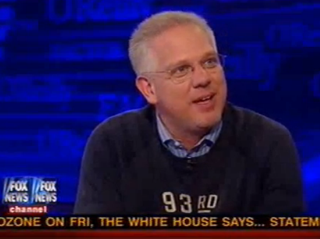 Glenn Beck has been warning about something he calls the “coming insurrection” for several years now, and finally he has seen its face appear concretely in the form of Occupy Wall Street. He visited The O’Reilly Factor last night to explain how Occupy Wall Street is a part of a larger “Marxist revolution that is global in nature” intended to “collapse the system.”

RELATED: Glenn Beck Stands By His Comments On Protesters: ‘It Ends In Violence With Marxists Every Single Time’

Beck, who hadn’t been seated across Bill O’Reilly for a few weeks given his work at GBTV, returned reminding O’Reilly that the “coming insurrection” was not a new theory, but one that was central to his programming in the last two years. Occupy Wall Street, he argued, was nearly exclusively the province of SEIU, though it was “a Marxist revolution that is global in nature.” Arguing that “they’re openly calling for revolution,” Beck warmed that they could “indoctrinate our kids into Marxism.” He also accused them of being transparent in the falsehood of their objectives: if they were truly upset about the price of higher education, why have the protests not been centered in the only place where power exists over those prices, universities?

O’Reilly then asked about the major figures behind the movement– it took little time for Beck to explain how George Soros was involved, and tie in Van Jones. “There will be chaos in the streets,” he warned, as part of a radical, violent movement springing out of Occupy Wall Street. “And then,” he continued, “Van Jones will appear with his little organization, which is much more reasonable.” He suggested the Jones version of Occupy Wall Street would look more like the Tea Party, and thus be far more appealing and dangerous.