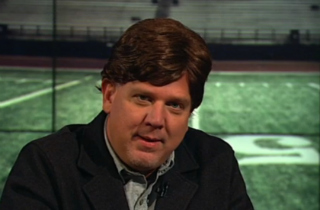 During his BlazeTV online show Monday night, Glenn Beck donned a wig and mocked NBC’s Bob Costas for his controversial Sunday Night Football speech decrying the “gun culture” that he believed was responsible for Kansas City Chiefs linebacker Jovan Belcher‘s murdering of his girlfriend and taking of his own life.

Beck took particular exception to the fact that Costas has yet to address the recent drunk-driving-related death of Dallas Cowboys linebacker Jerry Brown with the same sort of outrage that followed Belcher’s death. Brown was killed in a car accident, and the vehicle’s driver, teammate Josh Brent, was charged with intoxication and manslaughter.

“I’m filling in for Bob Costas today,” Beck jokingly began, “and we are going to do our best to continue his tradition of exceptional sports analysis along with exceptionally idiotic and logically flawed current events commentary.”

He then flipped the script on Costas’ poetic language in decrying a “gun culture”:

“Our current beer drinking and car driving culture ensures that more routine nights out with friends will end in the ultimate tragedy; that more innocent road trips will leave even more youngsters and babies strewn across the road. Roads bloodied. People dead. Beer doesn’t enhance our lives or our society.”

Beck then went on to mock Costas for citing columnist Jason Whitlock for his opinions on the gun culture.

“I was reading an article from some nutjob just the other day,” Beck mocked, “and he said, ‘Beer brings out the worst in all of us: beer goggles, liquid courage, liquid logic. ‘I’m OK to drive’ when you’re clearly hammered out of your mind!’ If Josh Brent didn’t have access to alcohol or own a car, he would not be in jail today, Jerry Brown would be alive.”

Beck then went on to jokingly imply that Costas did not treat the “beer culture” with similar outrage as the “gun culture” because “it could be that Bob was bought off by big beer or big car, I’m not sure which one it was. Maybe both of them,” seeing as how most advertisements during nationally-televised football games are for beer products.