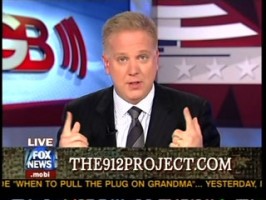 Today I watched one of the most bizarro TV shows that I have ever seen: Glenn Beck‘s 9/12 special on Fox News.

Even now, I am not sure what it had to do with 9/11 — other than completely co-opting it for Tea Partiers, Fox News, dissent and — oh yes — Glenn Beck.

The thesis: Beck wants this country to return to the values it held on 9/12/2001, the day after the terrorists attacks devastated and horrified the nation and the world. As someone who was in New York on 9/11 (and 9/12, and was evacuated from midtown office buildings in a panic along with thousands after a scare on 9/13), I remember those values being terror, bewilderment, shock, horror, and a profound grief. Over the days that followed, as people walked around in a daze and hugged and clasped hands more than usual, I recognized it as a city-wide sense of bereavement.

But Beck is right — there was also something else. There were people all over the city galvanized to try to help. People with medical training rushing to Ground Zero to see if they could offer assistance. Collections and donations for food and supplies. My roommate and I ran around our high-rise in an impromptu clothing drive, and took bags down to Chelsea Piers where volunteers were being organized. Rumbling past us along the West Side Highway were trucks, laden with white ash-covered debris. After seeing that, my roommate put his head down on his knees and just sobbed.

There was also the well-documented coming together of the country, looking to the President and his bullhorn, unable to turn the TV coverage off, donations pouring in to the Red Cross. There was a nation riveted, wanting to do something.

There was not, as I can recall, an angry if vague call to ward off socialism and cut taxes.

Yet that was what dominated today’s 9/12 Glenn Beck special on Fox News. Starting from the position that “Americans” “with their head in the sand” were to blame for 9/11 on 9/10/2001, he somehow moved to the now-familiar rhetoric of the Tea Partiers, about lower taxes and 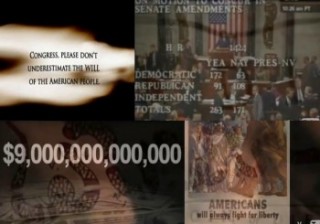 “taking our country back,” with a dash of fist-shaking at nebulous “political corruption” across government. Beck was careful to point out that the corruption was bi-partisan — he wasn’t on a particular side! — but of course happily hosted Republican Senator Jim DeMint and Congressman Mike Pence — two of “the good guys.” (And, of course, the past few weeks have left us with little doubt as to who the bad guys are. So there’s that.)

But as far as I can tell, other than the obvious and craven “hook” for the special, this two-hour special wasn’t about 9/11. I may have missed it, but I didn’t even see reference made to the 9/12 manifesto — its 9 principles and 12 values — that was supposedly the raison d’etre for the project. That may be because, as True/Slant’s Colin Horgan points out, they’ve been removed from the 9/12 website with no explanation.

>>>NEXT: Glenn Beck doesn’t trust “the media” and hates when you throw around the term “racist.” Also: Wet T-shirt contest!