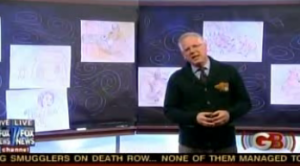 Glenn Beck was eager to encourage his viewers to “prepare so you’ll survive” and to not be lazy and “do the hard work.” What better way to drive his points home than through a dramatic retelling of “The Three Little Pigs.” Complete with Mr. Rogers music and a sweater, Beck unveiled his own very unique version of the classic fairy tale.

The lesson of the story, according to Beck, is that there are big bad wolves out there that will eat you and that if you don’t do your work and prepare, then the wolf will also eat you. The Japanese response to their earthquake, Beck suggested, taught us all to be prepared. Beck is worried though that there is a new politically-correct and environmentally-conscious version of “The Three Little Pigs” being taught in schools today that downplays the need for individuals to do hard work and doesn’t encourage kids to rely on themselves to make preparations.

Therefore, Beck in a special story-time segment, felt the need to demonstrate the true story and emphasize its moral. With special guest appearances from Democratic Congresswoman Nancy Pelosi as the Goat Woman, and organized labor leader Richard Trumka as the donkey, who Beck claimed was “actually an ass in my story – in fact I think he’s an ass in every story.” Beck suggested pigs that listen to Pelosi or Trumka will be eaten, but the pig that prepares and works hard on his own will survive.