Glenn Beck’s New Year’s Resolution: No One On My Show Can Mention ‘That Man’ Obama Anymore 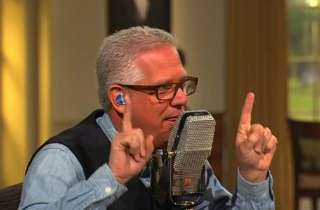 We’ll see how long this pledge lasts. As part of his New Year’s resolutions, conservative talk host Glenn Beck returned from the holidays with a new policy: no one can mention President Obama anymore on his show.

“Anybody who brings him up, besides me, is fired,” Beck said of the new policy. Astonished by the severity, co-host Stu Burguiere asked if staffers could get by with just mentioning that “the president said,” to which Beck said it would be evaluated on a “case-by-case basis.”

Instead choosing to refer to the president as “that man” or “that guy,” Beck explained the very loose definition of what counts as “mentioning” the president in his mind. After much back and forth with his colleagues, Beck said:

Burguiere joked that Obama is now like the villainous Harry Potter character Voldemort in that the novel’s protagonists referred to the evil wizard as “he who shall not be named.”

“Why summons that?” Beck said. “You’re just asking for trouble. Why bring that on? Don’t speak his name.”

Beck’s colleagues challenged him over whether they can mention the president’s name if they have anything positive to say about him, which resulted in the entire group shared a laugh at the highly unlikely probability of such an occurrence.

Burguiere expressed skepticism that Beck could go very long without saying Obama’s name, and then Beck explained that even the show’s callers are not allowed to mention the president. “Dump it,” the host said of any segment that includes a caller slipping the president’s name into the broadcast.

Watch below, via TheBlaze: