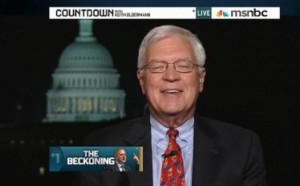 Glenn Beck‘s “Restoring Honor” rally has sparked a circular holy firing squad, with critics attacking Beck’s Mormonism from the left and the right. On last night’s Countdown, “Toxic Talk” author Bill Press detailed Christian attacks on Beck, noted Beck’s attack on President Obama’s religion, and finished with his own shot at Mormons. To Beck’s assertion that Obama’s religion is a “perversion of the gospel,” Press responded, “We don’t need a Mormon to teach Christians what the gospels are all about.”

In doing so, however, they quote a scripture from the New International Version, which would make the elders at some churches spit their drinks and exclaim, “Why don’t you just quote Tiger Beat while you’re at it?”

Aside from the Pope’s questionable authority as an arbiter of evil, Beck himself points out that the Pope would be first in line to knock Beck’s faith.

Faith requires a belief equal to certainty, without knowledge. If something can be proven, it’s not an article of faith. Consequently, if someone’s faith differs from yours, the strength of your own faith will be matched with the certainty that they are wrong. Unfortunately, observing the absurdity of magic underwear is immediately undercut when you follow it up by pointing out that it’s the wafers that are magic.

Everyone has articles of faith that could be seen as worthy of mockery by others. For example, I am convinced that I can negatively affect the outcome of a Jets game simply by verbally expressing optimism during the game. There is no rational basis for this belief, but it’s true. The Jets might still lose if I remain quiet, but at least then, it’s not my fault.

That’s why, when it comes to criticizing others’ beliefs, a large dose of humility is in order. Instead of parsing which parts of what book to take literally, we ought to embrace one of the great lessons of the Bible:

Translation: keep your fingers out of other people’s eyes. As long as no one gets hurt, let people believe what they believe, and if you have to be a jerk about it, you can point and laugh at the losers in the afterlife.