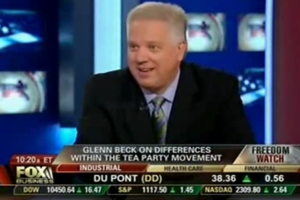 After a debut focusing on the variety of right-of-center opinions circulating in the Tea Party movement, Judge Andrew Napolitano‘s Fox Business program Freedom Watch outdid its star power last week with an A-list class of libertarian thinkers headlined by Glenn Beck. Beck, who was on to promote both his show and his new novel, The Overton Window, and to warn about the possibility that an emergency can fundamentally transform America.

Last week’s premiere of the Fox Business Network libertarian-leaning commentary program Freedom Watch was all about promoting the show, bringing the Fox family’s biggest attraction, Sarah Palin, to the fore but, in the process, it gave up a little bit of its unabashedly small-government voice. This week, Judge Napolitano brought back all the elements that made Freedom Watch so popular online: bold libertarian commentary challenging the status quo on controversial issues. While the entire lineup this week– including John Stossel, Rep. Dennis Kucinich, and Reason editor Nick Gillespie, among others– was full of soundbites questioning everything from the Iraq War to BP’s $20 billion escrow fund, the bulk of the program was dedicated to Glenn Beck and his bludgeoning of, among others, Woodrow Wilson, Teddy and Franklin Roosevelt, and, of course, President Barack Obama.

Beck challenged the notion that FDR was a popular president, noting that “people were frightened beyond belief of the overreach of FDR,” proof of that being the passing of term limits immediately after his death. He also confessed to Napolitano his greatest fear, and it’s not hard to guess: “that they [the Obama administration?] will use an emergency to fundamentally transform the country into something you don’t recognize.”

He also answered questions as to where he saw himself within the framework of the Tea Party. Asked by Napolitano whether he was more of a Sarah Palin than a Ron Paul, Beck chose the latter, although was hesitant to call himself a libertarian because “I don’t think they want me in their camp sometimes.”