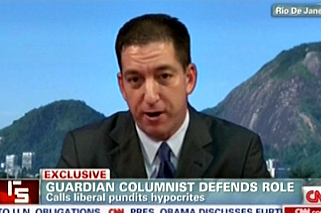 Appearing on Howard Kurtz’s Reliable Sources Sunday afternoon, Glenn Greenwald responded to critics of Edward Snowden’s revelation of classified material, and of Greenwald’s own reporting, which has come under fire for inaccuracies since its publication two weeks ago.

Greenwald said the personal nature of much of the media’s Snowden coverage was exactly what the 29-year-old defense contractor had feared.

“One of his big concerns with coming out,” Greenwald said, “really his only one, was that he knows political media loves to dramatize and personalize things, and he was concerned that the focus would distract away from the revelations of about what our government was doing on to him personally.”

“The other problem is that whenever there’s whistleblower, someone who dissents from our political institutions, the favorite tactic is to try to demonize him and highlight his alleged bad personality traits. That’s one of the reasons why we wanted to present him in his own words to the world, so that they could form their own impression before these smear campaigns began.”

Kurtz asked Greenwald how skepticism of Snowden constituted a “campaign.”

“I don’t think there’s any problem with people who want to criticize what he did on its merits,” Greenwald replied, “although I think it’s extremely strange that people who call themselves journalists find more contemptible than almost anything when someone steps forward and brings transparency to what the government is doing. That should be their jobs. They should be in the lead cheering for that.”

“Remember, the first instinct of the Nixon administration when Daniel Ellsberg published the Pentagon Papers was to break into his psychoanalist’s office to get his psychosexual secrets. David Brooks writes a column depicting [Snowden] as a loser and a loner. Richard Cohen in the Washington Post did the exact same thing. It’s the tactic of the establishment to try to demean people’s psyche and personality as a way of discrediting their revelations.”

In response to criticisms that Greenwald misrepresented the PRISM program, portraying the nine major internet companies as giving the NSA direct access to their servers when they in fact just allowed access to a remote dropbox, Greenwald said, “I think it is significant that the PRISM story in particular was published by Bart Gellman, a two-time Pulitzer Prize winner, and vetted by all the Washington Post editors, as well as the editors in the Guardian and me as well.”

Greenwald also chastised liberal voices for not condemning the surveillance programs now that they’re under Obama instead of bush.

“I first started writing about politics in late 2005, and I focused almost exclusively on the NSA scandal back then,” Greenwald said. “The way that I developed a platform was almost every progressive, liberal, democratic blogger, media outlet, person with a platform would promote the work I was doing…they were all cheering for the condemnations I was issuing…Uniformly, I bet you cannot go back and find a single liberal or progressive or democratic pundit taking Alberto Gonzalez’s side or condemning the source who blew the whistle on that program.”

Greenwald also told Kurtz that there were documents Snowden had given him that he would not publish out of security concerns.

“There are things that we’ve already held back,” Greenwald said. “He didn’t want us just dumping documents that would, for example, enable other countries to copy the massive surveillance scheme that the NSA is building and impose that on their own citizens. We didn’t want to print blueprint guides for other countries and intelligence services as to how to replicate what the NSA is doing. We just want to inform the American people about what their government is doing so they can democratically decide if that’s what they want.”