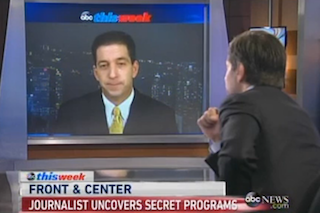 On This Week With George Stephanopoulos, Guardian journalist Glenn Greenwald argued that his revelations of the NSA’s blanket surveillance showed the depth of the agency’s dishonesty with members of Congress who were tasked with regulating the programs.

“There are members of the Congress who have the responsibility for oversight,” Greenwald said, “for checking the people who run this vast secret apparatus of spying to make sure they’re not abusing their power. These people in Congress have continuously asked for the NSA to provide basic information about how many Americans they’re spying on, how many conversations and telephone and chats of Americans they’re intercepting. The NSA continuously tells them, ‘We don’t have the capability to tell you that, to even give you rough estimates.’ What these documents that we published show, marked top secret to prevent the American people from learning about them, was that the NSA keeps extremely precise statistics. All the data that the senators have asked for, the NSA has falsely claimed doesn’t exist.”

Oversight is one of the key arguments of defenders of the program, who maintain that they are not government run amok but closely watched and regulated intelligence tools.

Greenwald, who has broken three separate stories about government surveillance within a week, also indicated that he may have more than one source inside the government providing him with materials. “Unfortunately, since the government hides virtually everything they do with the threat of criminal prosecution, the only way for us to learn about [these programs] is through the courageous whistleblowers, who deserve our praise and gratitude, and not imprisonment and prosecution.”

“Clearly there are all kinds of negotiations taking place, and all kinds agreements have been reached between these internet companies that store massive amount of communication data about people around the world, and the government,” Greenwald said. “We reported these precisely because we want those parties to resolve it in public, in sunlight, and let people decide whether or not that’s the kind of country they want to live in when the government can get this massive amount of information.”

Greenwald also waved off speculation that he would become part of a criminal leak investigation. “The attempt to intimidate journalists and sources with these constant threats of investigation aren’t going to work,” Greenwald said.

“Every single time that a media outlet reports on something that the government is hiding,” Greenwald said, “that political officials don’t want people to know—such as the fact they’re collecting the phone records of all of Americans regardless of any suspicion of wrongdoing—the people in power do exactly the same thing: they attack the media as the messenger and try to discredit the story.”

“The only thing we’ve endangered is the reputation of the people in power who are building this massive spying apparatus without any accountability,” he continued. “These are things that the American people have the right to know. The only thing being damaged is the credibility of political officials and the way they’re exercising power in the dark.”

Watch the segment here, via ABC: