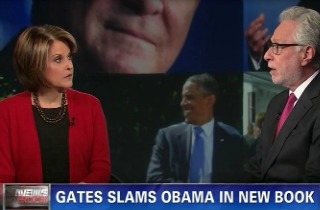 CNN’s Chief Political Analyst Gloria Borger took a swipe at former Defense Sec. Robert Gates on Wednesday in reaction to the many ways in which he was critical of President Barack Obama, former Secretary of State Hillary Clinton, and Vice President Joe Biden in his forthcoming memoir. Borger said that it would have been better form for Gates to have waited until Obama left office to publish a critical memoir.

Borger conceded that Gates’ criticisms of Biden are “a blow” to Biden. However, the vice president’s political party’s antipathy toward military action in Iraq and Afghanistan, Borger said, will mute these revelations’ impact on Biden’s political prospects.

RELATED: Beck Bashes Gates: If You Thought Everything Was So Bad, Why Didn’t You Just Resign?

“Were you surprised that Gates wrote this book, and attacked a sitting president, a sitting vice president?” Blitzer asked.

“I think I was,” Borger replied. “I was surprised that he did it while the president was still in office. The president did award him the Medal of Freedom, after all.”

Borger said that Gates believed that the administration staffers were mistrustful of the military and “belittled” servicemen and women.

“I believe he should have waited until the president was out of office,” she concluded.

Both Borger and Blitzer agreed that they would be interested to see what Biden and Clinton have to say about Gates when they write their memoirs.