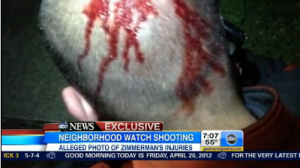 On Friday, ABC’s Good Morning America offered an exclusive look at injuries allegedly sustained by George Zimmerman the night of his struggle with Florida teen Trayvon Martin — a struggle that ultimately ended in Martin’s death. Zimmerman, those close to him, and his legal team have maintained that the 17-year-old had knocked him to the ground and proceeded to bash the back of his head against pavement that February night in a Sanford, Florida neighborhood.

Previously released video of Zimmerman being escorted by the police for questioning had initially appeared not to show any injuries or blood on Zimmerman’s person. But, now, these newly-released images, taken shortly after Zimmerman shot Martin, show highly-visible streams of blood at the back of Zimmerman’s shaved scalp.

The person who took the photograph at the scene says a dazed Zimmerman asked him to call his wife and tell her he’d just shot someone. The photographer also claims to have seen gun powder on Martin’s hoodie, an indication that the shooting allegedly occurred at close range.

GMA brought on ABC analyst and Mediaite founder Dan Abrams to discuss what these images might mean for Zimmerman’s case.

“There’s no way to be 100 percent certain of the photo,” said host Robin Roberts. “But ABC News did extensive vetting for the accuracy of the photo.”

“Yeah, before they’re even going to put it on the air, a lot of things done here,” Abrams explained. “They compared the background, for example, a number of pictures taken on the iPhone. The background does appear to be the scene. The fleece matches what he was wearing. The hair cut matches the hair of George Zimmerman. The photo has embedded data, showing that it was taken that day at a particular time. It was geo-tagged, etc. But look, in the end, it comes down to the reporting on it. And our reporters on the scene have been saying this has been a very reluctant person to come forward. This person did not want to give up this picture initially. They’ve been talking about how important it is to show this picture, etc. And that’s how it ultimately came out. We’ll have to see. Before something like this will be admitted in a courtroom, they would have to determine its reliability.”

Roberts noted that the case’s Special Prosecutor had indeed seen the photo.

Roberts then wondered about the likelihood that Zimmerman would go free today.

“If this wasn’t this case, I would say 90 percent,” Abrams replied. “But because this is such a high-profile case and there’s so much riding on it, I would say only 60 percent chance that he’ll be released. Typically in a case like this, when you have someone that hasn’t demonstrated to be a flight risk, who has ties to the community the way that he does, and doesn’t seem to be a danger to the community moving forward, based on his past behavior since this happened, you’d think he’d be released. But in this case, not so sure.”