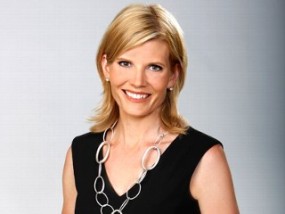 It is the latest change at Good Morning America since Diane Sawyer left to become World News anchor.

Snow joins the network as a correspondent for Dateline and will “contribute to the newsmagazine and other NBC News properties,” according to the release.

This is a great day for NBC News,” said President Steve Capus in the release. “Kate is a tremendously talented and respected journalist. This signifies our commitment to growing ‘Dateline’ as it continues its ratings success in primetime, and our belief in investing in the future talent of NBC News.

Since Sawyer’s exit, George Stephanopoulos came in to take her role, and news anchor Chris Cuomo left to take a job at 20/20 and become Chief Law and Justice Correspondent. His role was filled by Juju Chang – but Snow certainly seemed in contention for that. TVNewser tweeted Snow “had out in ABC contract after not getting weekday GMA gig,” and was promptly scooped up by NBC.

She’s a high profile broadcast news name whose current role is different than the morning show job it sounds like she was looking for. But the NBC News role allows her to expand into other areas – mainly on cable, with MSNBC.

Kate Snow will be joining NBC News as a correspondent for “Dateline.” Beginning later this spring she will contribute to the newsmagazine and other NBC News properties. The announcement was made today by NBC News President Steve Capus.

“This is a great day for NBC News,” said Capus. “Kate is a tremendously talented and respected journalist. This signifies our commitment to growing ‘Dateline’ as it continues its ratings success in primetime, and our belief in investing in the future talent of NBC News.”

“‘Dateline’ has enjoyed a great period of success and we are now even more fortunate to be welcoming Kate to our team,” said executive producer David Corvo. “She’s the whole package. She can cover breaking news, she can interview, she can write, and I’m happy she’ll be doing all that at ‘Dateline.'”

Previously, Snow was the anchor of the weekend edition of “Good Morning America” since the show launched in September 2004. Based at ABC News’ headquarters in New York, she also contributed to various ABC News broadcasts as a correspondent, frequently reporting for “Good Morning America,” “World News with Diane Sawyer” and “Nightline.”

A political junkie with a deep interest in world events, Snow covered a wide range of stories for ABC News. She was one of the first ABC News correspondents on the ground in Haiti after the devastating earthquake there and covered everything from search and rescue efforts to incredible stories of survival.

Over the years, Snow has reported on stories from the economy to immigration, medical advances to Oscar fashions, energy policy to Katrina evacuees. She has traveled to remote Africa, covered conflict in Lebanon and hiked the Badlands for “Good Morning America’s” “Seven Wonders” series. And Snow has conducted exclusive interviews with newsmakers from President Barack Obama to billionaire Richard Branson, from Senator Ted Kennedy to Beyonce and Bono.

Snow has covered several presidential elections in her career. In 2008, she covered the campaign of Hillary Clinton from start to finish. For some eighteen months, Snow did double duty as a weekend anchor and the lead correspondent on that campaign during the week. She also covered the Democratic convention in Denver and Alaska Gov. Sarah Palin’s bid for the vice presidency. In the summer of 2008, Snow landed the first interview with former President Bill Clinton in the wake of his wife’s failed White House run. In 2004, she was the first network correspondent to travel with Sen. John Kerry during his campaign for the White House and she also covered President George W. Bush’s re-election campaign that year.

Snow joined ABC News in July 2003 as “Good Morning America’s” White House correspondent. In the summer of 2004 she moved to New York to launch the weekend broadcast.

Before joining ABC News, Snow was a correspondent with CNN. She covered the Sept. 11 attacks from the rooftop of a church near the U.S. Capitol, was the first television journalist on the scene of the anthrax attacks and spent weeks covering the 2000 recount in Florida. Prior to her Washington assignment, Snow was based in Atlanta with CNN Newsource. In that role, she covered the Kosovo conflict from Albania and Macedonia.

Snow began her news career as a reporter with KOAT-TV in Albuquerque, N.M., where she also anchored the station’s weekend morning show. She has also worked for National Public Radio and NBC Radio.

Snow was part of the ABC News coverage team to be recognized with the distinguished duPont Columbia University Award for her coverage of the death of Pope John Paul II in April 2005. She is also the recipient of a Cornell University Alumni Achievement Award.

Snow is a graduate of Cornell and holds a master’s degree in foreign service from Georgetown University. She serves on the national board of Big Brothers Big Sisters of America. Snow and her husband, Chris Bro, have two children.