GMA’s Robin Roberts on Sam’s Kiss: ‘What Was He Supposed to Do, Shake Hands?’
VIDEO

GMA’s Robin Roberts on Sam’s Kiss: ‘What Was He Supposed to Do, Shake Hands?’ 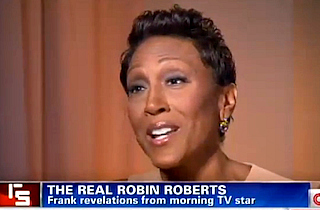 Good Morning America host Robin Roberts spoke to Reliable Sources’ Brian Stelter Sunday morning, in a follow-up interview to one conducted in 2012, when Roberts was battling the blood disease MDS and before she opened up about her relationship with her girlfriend last fall. Roberts talked to Stelter about her recovery from a bone marrow transplant, Michael Sam’s famous kiss, Barbara Walters’ legacy, and more.

“What was he supposed to do, shake his hand?” said of Sam’s kiss. “It was one of those moments that, when you saw it, it was so spontaneous. It was so natural. …He’s happy like every other young man was happy, and turned to somebody and showed their gratitude an expressed their love for the person that was next to him. His just happened to be his boyfriend.”

Roberts also spoke about how her coming out has helped others struggling with public or familial acceptance.

“We were pleasantly surprised that there was a big shrug of the shoulders,” Roberts said of the reaction to her Facebook post. “So many people have come up to me — and it wasn’t even a part of the story I was really thinking about, but the number of young people that said they can now have a conversation with their parents…I find it surprising that somebody in your family that doesn’t even know me, but for whatever reason it helps you understand your own family member’s orientation, wow. I’ve been so busy fighting for my life that I didn’t think about that aspect of the story, but I’m very grateful that it is creating dialogue for families.”