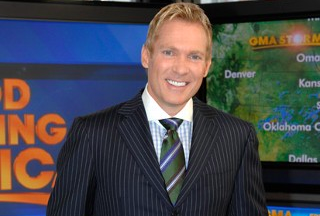 Sam Champion, who for the last seven years served as weather anchor on ABC’s Good Morning America announced Monday that he will be leaving ABC News to join The Weather Channel. ABC News President Ben Sherwood informed his news team in a letter this morning:

Our friend and colleague Sam Champion is leaving ABC News for a new opportunity at the Weather Channel. He will become the on-air face of the network, appearing as a host and serving as managing editor. Sam calls it a once in a lifetime opportunity.

Over the years at GMA, Sam has broadcast more than 1,800 weather forecasts. He has traveled to almost every major weather event in the U.S. As many of you know, Sam’s “Go” bag is always ready and his stellar reporting during Superstorm Sandy contributed to ABC’s Peabody Award for coverage of that historic storm.

Sam has broadcast live from a raft floating between polar icebergs, danced the salsa on “Despierta America” and interviewed countless newsmakers, celebrities and chefs. On his show “Sea Rescue,” viewers have shared Sam’s passion for marine animal rescue, rehabilitation and release.

While there is no replacing Sam, we are in excellent hands with his storm chasing partner of the last few years, meteorologist Ginger Zee, who will take over his weather responsibilities at GMA and across ABC News. As you know, Ginger always rushes straight toward the eye of any storm and weaves cutting-edge science with human emotion to elevate our coverage.

GMA will celebrate Sam’s last day on Wednesday’s program. While he is leaving ABC News, he will always be a part of our family.

Please join me in thanking Sam for his friendship and countless contributions to our news division. And let’s all wish him the very best and say so long for now.