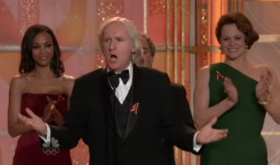 “Give it up for yourselves,” said James Cameron last night, accepting the Golden Globe for Best Picture for his giant blue 3D masterpiece, Avatar. He had already taken the Best Director nod — besting ex-wife Kathryn Bigelow, who he generously acknowledged in his speech, and causing a minor Twitter firestorm by actually speaking in his movie’s invented language of Na’vi. At first I thought that speaking Na’vi (“I see you, Golden Globe”) was the new “I’m the king of the world,” but it turns out that that was “Give it up for yourselves,” as he urged the Golden Globe audience to pat themselves on the back for delivering great entertainment to their far-flung friends around the Globe. It was a sentiment that everyone in that room had spent the night embracing — it was an awards show, after all — but it fell oddly flat, eliciting only tepid applause for the final speech of the night (and if you want to hear non-tepid applause, then you should have been paying attention to the response for Glee).

What explains the awkwardly expressionless faces of Glenn Close and Leo DiCaprio in the audience, the almost collective groan when Cameron said that he was going to take his time, the lukewarm…everything? Since Avatar was and still is a giant hit, not to mention a technical masterpiece and a box-office rising tide that arguably lifts all boats (movies are back! Big budgets are worth it! Damn Avatar‘s sold out I guess we should go see the Squeakquel!), there can really be only one reason for the audience’s less-than-enthusiastic reaction: the hair.