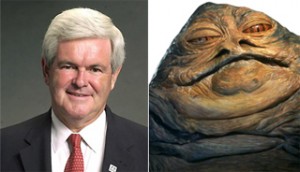 On Thursday night’s The Last Word, host Lawrence O’Donnell discussed the recent fortunes of former House Speaker Newton Leroy Gingrich with panelists Goldie Taylor and Touré, and in addition to providing fresh insight into Newt’s newly-resurfaced extramarital history and racial politicking, they also managed to sneak in a few Star Wars references. Goldie likened Newt’s supporters to “stormtroopers,” while Touré compared Gingrich to Jabba The Hutt. Taylor has already cemented her status as cable news crush to several of my colleagues, but if she breaks out her Klingon to English Dictionary, who knows what will happen?

O’Donnell started off by playing a clip from Marianne Gingrich‘s bombshell interview with ABC News, in which she claims her then-husband tried to enlist her in an “open marriage.”

Touré made the excellent point that what Marianne Gingrich described wasn’t actually an “open marriage.”

“He’s saying, hey, I got a mistress, are you going to roll with that or not?” Touré said. “That’s not an open marriage. That’s ridiculous leveraging.”

He then went on to deepen the distinction, making the case for “honest” open marriages. Practically speaking, though, it;s tough to imagine such an arrangement ever being truly equal, since modern-day culture (even in Europe) places most of the risks inherent in such behavior disproportionately on women. It’s like a fish telling a land mammal, “Let’s go swimming!”

O’Donnell then asked Taylor “What is the difference between Newt’s proposal for an open marriage, and Bill Clinton simply executing an open marriage, pretty much throughout, as far as we can tell, every year?”

Taylor had a bumper sticker-ready response. “The only thing open, in an open marriage, is somebody’s legs at the wrong time.”

“I mean, that’s sort of the long and short of it,” she continued. “You know, we have a name for that in America. It’s called roommates. You just don’t get married if you’re not willing to put together what is a very tight social contract, that involves finances and possibly children and households, and yes, sex too.”

Taylor also agreed that the Southern Baptist culture of forgiveness would probably prevent these revelations from hurting Gingrich too much. “I think you’re dealing with an electorate, you know, I’m a proud Christian and a proud Southern woman. And one of the things that we believe in is reconciliation.”

On the subject of Gingrich’s recently escalated racial drumbeat, Goldie said “Newt Gingrich has been doing this for 30 years. He’s been thumping the drum of racial insensitivity for 30 years, stoking people’s fears…They put us all in the same boat. black and white, all of us poor, and got us all rowing in different directions against each other.

“He’s doing this purposely,” Taylor continued, “so he can drum up a very specific base that he knows will turn out in this GOP primary. Those people vote like stormtroopers, and if he can get them to his side, he cannot lose.”

Touré brought the subject back around to Gingrich’s wandering lightsaber. “The open marriage came out today, and there’s something in a news, political sense, sexy about…”

“It’s gross, in a Jabba the Hutt way, but it’s a lightning rod issue in that sort of way. and sure, it’s the thing that people wanted to hear about. Hey, Newt, what do you think about this? So as John King, you’ve got to ask him, and Newt Gingrich’s response in terms of blaming the media is so gross and offpoint. It’s not the media’s problem here. It’s whether or not he did this, and he seems to have had disgusting behavior toward his wives repeatedly, and whether or not his wife is telling the truth.”

It looks like Taylor is probably right that Gingrich’s marital history won’t hurt him in this weekend’s South Carolina primary, but I think she gives that electorate too much credit. That Christian forgiveness seems to end at the line between red and blue.