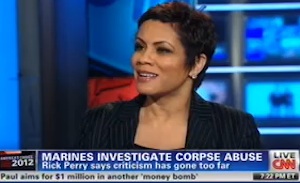 Political commentator Goldie Taylor appeared on CNN Newsroom Sunday evening to respond to Texas Governor Rick Perry‘s comments, in which he deemed calls for the bringing of criminal charges against of the Marines urinating on the bodies of slain Taliban as, “over-the-top.”

According to the Red Cross’ case study on international humanitarian law:

It is also contained in Additional Protocol I, albeit in more general terms of “respecting” the dead, which includes the notion of preventing the remains from being despoiled.

The prohibition of mutilating dead bodies in international armed conflicts is covered by the war crime of “committing outrages upon personal dignity” under the Statute of the International Criminal Court, which according to the Elements of Crimes also applies to dead persons.

Watch a clip of Taylor disagree with Perry’s views below, courtesy of CNN: